On the 4th day of July, Americans will gather to celebrate a very important day in the history of the United States – their ‘Declaration of Independence’. Citizens display the flag outside their homes and businesses. This celebration is our way to express gratitude and appreciation for those who fought for our freedom.

Here is a brief history.

These colonies started to revolt and seek their independence because of the imposition of unjust British laws and taxes such as the Sugar Act and Tea Act. Delegates from the Thirteen Colonies convened and declared a war of independence against the British Empire in 1775.

By the following year, 56 representatives of the Thirteen Colonies signed the Declaration of Independence. Thomas Jefferson and Benjamin Franklin were two of the signatories. And in 1783, the war had ended and the independent United States of America was born.

Promoting the Celebration of Independence Day! 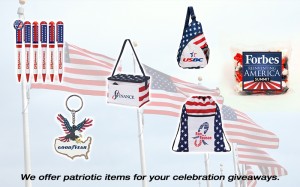 Celebrate Independence Day with patriotic products to promote and show respect, loyalty, honor and love for our country.

Holidays are a great time to say Thank You to your customers, employees and  business partners. We offer patriotic items for the celebration and we’ve got great ideas for your 4th of July – corporate events, family gatherings and fundraisers. These products will help show your appreciation to friends, family and those who contribute  to the growth of your business.

Call us today to Help You Thank, Invite, Excite, Recognize and Reward Those Important to You!

https://youtu.be/j2cMDdd67_Y We here at SWFL Marketing Group love to assist our customers in making meaningful connections with their audience, and we strive to help our

Hats and headwear can be used effectively in many different ways by many different industries! https://youtu.be/B4arw45-Kvo We here at SWFL Marketing Group love to assist

How can we help Contractors and other Construction / Service Professionals? Today we’re featuring one of our largest professional categories of business that we serve.

Today we’re diving into the Wedding Industry!The Wedding Services Industry grossed about $22.6 billion dollars in 2020, so it’s safe to say that it is